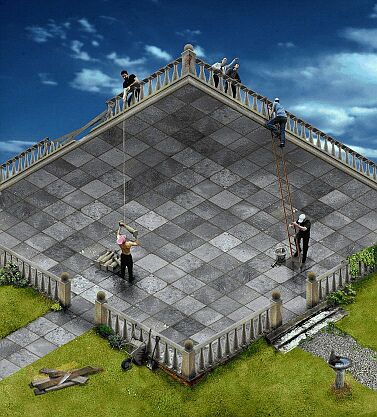 What Do You See?

Yes, it’s one of those kinds of pictures.  At first glance you have an immediate idea of what you see.  Then, upon closer inspection, you see something different.

Sometimes we see what we see because that is what we want to see or expect to see.  (yes, you’ll have to read that sentence a couple of times for it to make sense.)

At a marriage retreat I attended one time the speaker showed a powerpoint slide that had an “x” and a tiny dot on it.  He said, “That’s what causes most of the problems in a marriage.  That’s an ‘x’ and that ‘dot’ is a speck.  Put them together and you have ‘x-speck-tation.'”  (It was funnier when he told it that it reads now.)

His point?  Expectations – that’s what creates problems in a marriage.

It is especially problematic when couples don’t share their expectations with each other.  Brian and Katherine were just such a couple.

When they came to see me for counseling, they were full of frustration and resentment toward each other.  Feelings had been hurt over and over.

After we’d spent a few months working on enhancing their relationship, they announced they were going to fly to Myrtle Beach (where they’d gotten married) for a weekend second honeymoon.  While I was excited about their enthusiasm, I was apprehensive that they might be expecting too much too soon.

When they returned to see me after the trip, they appeared totally deflated and discouraged.  I asked them to tell me what happened.

“I made sure we had the nicest suite we could afford,” Brian says boastfully.  “It had a hot tub in the bathroom.  A great view of the ocean, too.”

Rolling her eyes, Katherine says, “Exactly!  It had everything in it except a thoughtful husband.”

Brian crosses his legs and mumbles something.

Waving his hand, he says, “Oh let her tell it her way.  She’s going to be right, no matter what I say.”

Taking his cue, Katherine says, “After we had a great dinner together at a seaside restaurant, we went back to the hotel.  I was looking forward to an evening of pleasure with Brian.  So I went into the bathroom, showered and put on fresh makeup.  I’d bought a new negligee that I thought he’d really enjoy.

“I kept waiting for him to come and join me in the bathroom and we could get in the hot tub together.  I’d been dreaming about the moment ever since we decided to make the trip.  But he never came.  Thirty minutes passed and still no Brian.  I got so furious that I took off the negligee, ripped it up and threw it in the trashcan.  I pulled out my old raggedy night shirt and stormed into the bedroom.”

She pauses to look at Brian.  He appears as if he is in total retreat; a man in his cave.

When he doesn’t speak, Katherine continues.  Looking at me, she says, “And guess what I found in the bedroom?”

She waits for me to respond.  Instead of giving her one of the thousand possibilities that rocketed through my mind, I shrug my shoulders in ignorance.

Pointing a finger at Brian, she says, “I find him sitting in the bed with a silly grin on his face.”

Unfolding himself to become engaged again, Brian says, “Exactly.  I was being patient waiting on you to join me in bed.  It’s all I’d thought about since we made the plan for the trip.  I decided you’d gone down the drain you were in there so long.  But I didn’t get upset and yell at you.  I was doing what I thought was the right thing – let you take your time.”

Having vented their spleen, Brian and Katherine sit back and look at me.

This is always the uncomfortable moment for a therapist.  It is clear that your client(s) is expecting some sort of six-word sentence that is both going to explain the problem and give the answer to fixing it, too.

I choose to be a mirror and use their own words so they can see the problem for themselves.

“Let me be sure I understand,” I begin.  “Katherine you had been making intricate plans for your night at the motel.  You carefully selected just the right negligee and perfume for the evening.  You envisioned Brian coming gently to you in the bathroom and after some cuddling, you all would spend time in the hot tub enjoying the pleasure of touch.  Is that right?”

With her eyes reddening, Katherine replies, “Oh yes, that’s exactly what I thought was going to happen.”

With an icy tone, she adds, “He gets it Brian!”

Ignoring her dig at Brian, I say, “And Brian you had been thinking about how wonderful it would be to have a night in bed with your wife, without the distractions of kids.  You envisioned her coming to you in her beauty and joining you in bed.  The smell and sound of the ocean would come through the open balcony door, making it a perfect evening of love making.  Is that right?”

Looking at Katherine but speaking to me, Brian answers, “That is exactly what I had in mind.”

I doodle on my notepad to let everyone absorb the intensity of the moment.  Then I ask them, “Do either of you find either one of your plans objectionable?  That is, do you see anything wrong with each other’s plans for the weekend?”

Their resistance to somehow being made to look like a loser in this tussle gives them both a pause before answering.

Katherine takes the first turn at shifting her focus.  “Well no.  There was nothing wrong with his idea.”

Following her lead, Brian agrees, “Sure.  Her idea was a good one, too.”

I doodle some more, hoping that a little light might shine through the door they’ve cracked open on this discussion.

After a moment, without looking up, I casually ask, “Did either of you share with your spouse what your idea was before you left on the trip?”

I sneak a peek over the top of my glasses to gauge their response.  At first there is the stunned look of a deer in the headlights.  Then they look at each other to see if perhaps their spouse will remember something that they do not.  Their eyes focus on insignificant items in my office as their minds turn.

“Let the silence speak,” I say to myself during the prolonged quietness.

Brian and Katherine look at each other again and then toward me.

“So,” Brian begins slowly, “maybe if we’d talked about it before hand, we wouldn’t have ended up in such a mess.”

Nodding, Katherine says, “Yes, if I’d told Brian what I expected and vice versa, we could have come up with some kind of composite plan that would have pleased both of us.”

It’s always nice when the client(s) finds their own solutions.

[For other articles that will enhance your relationships, click on the category “Family Helps.”]