If a potential employer told you you had to do something 20,000 times, you’d probably decline the job offer.  How boringly repetitious “20,000” sounds!  It would be mind numbing, right?

Little did I know that that was what I was getting myself into when I married forty years ago, January 5, 1973.  It began as an imitation of “Father Knows Best.”  The ritual was regularly performed on that perfect t.v. marriage, so surely it would work for ours, too.  It was the “good-bye-I’m-off-to-work-kiss” and the “hello-honey-I’m-home-kiss.”

Brenda and I have done that for forty years.  When you have an overactive mind like mine, you often find yourself picking up snippets of information and chasing them to the end of (or maybe beyond) reason.  I decided to figure out how many kisses that added up to.  If you figure two kisses a day x five days a week x fifty weeks a year x forty years, you come up with a staggering 20,000 kisses!  (That doesn’t even include those “other” kisses that have occurred during the marriage!  wink, wink)

I was floored by that number because I don’t remember any of those kisses being boring or mind numbing.  Did they always make fireworks go off in my head, or elsewhere?  No.  That’s not the point, nor was it the point during those kisses.

This is something that youth doesn’t understand – kisses are not always about passion.  They don’t have to be a springboard into the stratosphere.

Mine and Brenda’s hello and goodbye kisses were what I would call “statement kisses.”  They were kisses that said, “I am still committed to you.”

I’m a big believer in healthy rituals and traditions.  Those behaviors that have meaning, that tie us or ground us have a powerful affect on our psyche.  They contribute to calmness in a storm.  They provide an anchor.  Yes, even something as simple as a kiss can do that. 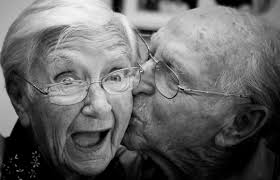