Is your supervisor a rhinoceros?  What about your spouse?  Or perhaps it’s a coworker. 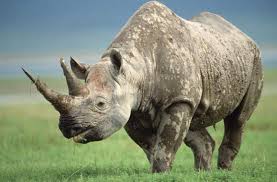 You know the kind I’m talking about.  They are confrontational, pointed and angry.  Intimidation and threats are their favorite weapons.  And they are very pushy!

Everyone knows when Bill arrives at work.  He doesn’t walk into a room.  He knocks the door down and comes in steaming.  Nostrils flared, eyes wide, he throws his head about looking for a victim.  He makes everyone feel like they are on the verge of being fired, that the company is going to fold and that it is your fault and your fault alone.

His demands are unrealistic, demands that even he cannot meet.  No one is ever doing enough.  Quotas have to be higher, productivity has to be increased.

Once he leaves the room there is a collective sigh of relief, people wipe the sweat off their brows, and tears are dabbed with kleenex.  Several people take out their package of Tums and chew two tablets to try and quell the acid soup in their stomach that Bill has triggered.

So how in the world do you deal with someone like this Rhinoceros?

For some final, lighthearted thoughts on the rhinoceros, consider Ogden Nash’s poem:

The rhino is a homely beast,
For human eyes he’s not a feast.
Farwell, farewell, you old rhinoceros,
I’ll stare at something less prepoceros.